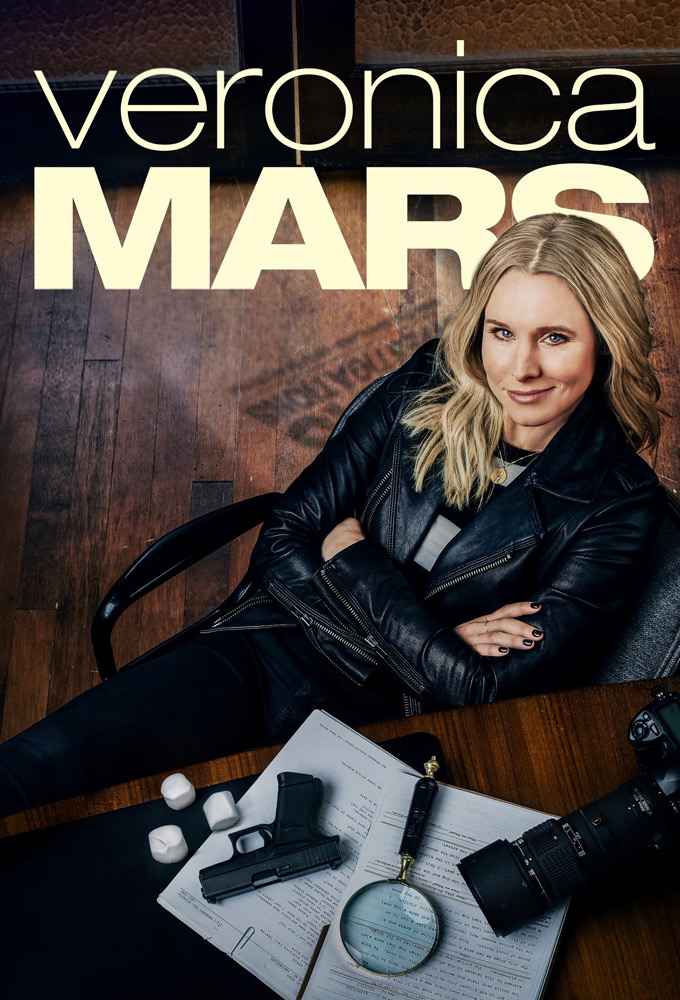 In the wealthy, seaside community of Neptune, the rich and powerful make the rules. They own the town and the high school, and they desperately try to keep their dirty little secrets just that...secret. Unfortunately for them, there's Veronica Mars, a smart, fearless 18-year-old apprentice private investigator dedicated to solving the town's toughest mysteries. During the day, high school senior Veronica negotiates the halls of Neptune High like any average teenage girl. By night, she helps with her father Keith's private investigator business, sneaking through back alleys and scoping out no-tell motels with a telescopic-lens camera--while studying her math book--in an attempt to uncover the California beach town's darkest secrets.


‘Veronica Mars’ Review: A Teen Heroine Grows Up
Hulu’s reboot of the cult-favorite UPN series feels both of-the-moment and true to its noir roots

Early in Hulu’s revival of Veronica Mars, the title character (Kristen Bell) visits one of the many men she put behind bars as a teenager. Realizing that she’s still working as a private investigator, he snipes, “That was your job in high school, right?”

Television shows are a product of a particular time in the lives of their characters, creators, and audiences. One of the biggest problems with the recent trend of belated-sequel seasons is that they try to act like nothing has changed for any of those groups when, say, a 32-year-old Rory Gilmore shouldn’t still be acting like a 20-year-old. This issue should be especially acute for Veronica Mars, which in its original run drew much of its power and verve from presenting a hard-boiled gumshoe who looked like she had just quit the school dance team. (She had, actually, in the wake of her best friend’s murder.)

But the new eight-episode Hulu season is keenly aware that its heroine is stuck in neutral. It’s less surprising for her as an adult to be doing stakeouts and fending off gangsters at gunpoint. But it’s also sad and self-destructive — in a very film-noir kind of way — that she’s retreated to the role she had before she was old enough to vote. When her high school frenemy Weevil (Francis Capra) asks what’s wrong with her, she cracks, “You know, there are a range of opinions.” She spends as much of her narration beating herself up for mistakes and character flaws as she does helping us follow the complicated case that’s brought her back to television. And Bell is just as charismatic, vulnerable, and slick with the banter as she was when she could pass for an 11th-grader.

Veronica creator Rob Thomas presciently set the original series in a California beach town with no middle class — only the ultrarich and the people who work for them. The setting works even better amid our present-day class warfare, and the plot involves a series of bombings that may be connected to a movement to drive out the city’s few remaining mom-and-pop businesses. Chief among the early suspects: “Big Dick” Casablancas (David Starzyk), a real-estate mogul (and holdover from the original series; he’s the father of Ryan Hansen’s Dick) publicly insisting that “we need to get back to a better time.” There’s a healthy mix of new faces, including Patton Oswalt enjoying his celebrity as witness to the first bombing; J.K. Simmons at his most charming as an ex-con now working as Big Dick’s enforcer; Kirby Howell-Baptiste as a bar owner Veronica befriends; and Izabela Vidovic as a teen reminiscent of Veronica back in the UPN days. And Veronica of course works the case with her beloved father, Keith (Enrico Colantoni, appealingly relaxed as ever, even as Keith battles health issues), while still trying to make things work with high school flame Logan (Jason Dohring, who apparently lives at the gym now).

This is the second time Bell and Co. have returned to this world: A 2014 movie introduced us to Veronica as an adult. Perhaps because the film was funded by Kickstarter, Thomas and Diane Ruggiero-Wright (who also co-wrote the new season) leaned hard into fan service, with a mystery that was largely an excuse to bring back as many old favorites as possible. It was fun in spots, but a violation of the bleak noir ethos of the original series, which was at its best when it denied the audience what it wanted and gave them what the story demanded. The Hulu version also features a host of familiar faces, like Max Greenfield as Veronica’s ex Leo (now an FBI agent looking into the bombings), but they turn up only when the plot calls for them. And the ending to this new mystery feels satisfying both to the narratives and to the themes of Veronica’s life as a woman who can’t stop looking for the truth, no matter how much it hurts. The conclusion is darker than some fans may want, but feels like a necessary corrective for this new phase of our heroine’s life. It’s a terrific return to form for one of television’s all-time great underseen gems.