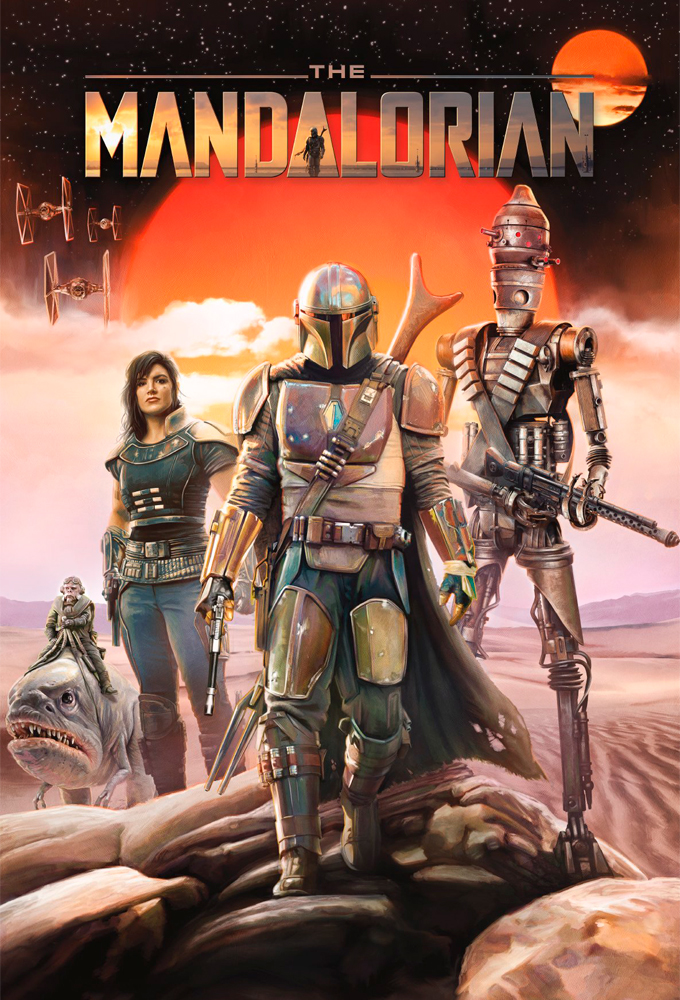 After the stories of Jango and Boba Fett, another warrior emerges in the Star Wars universe. The Mandalorian is set after the fall of the Empire and before the emergence of the First Order. We follow the travails of a lone gunfighter in the outer reaches of the galaxy far from the authority of the New Republic.


‘The Mandalorian’ (and Mistakes) Kick Off Disney+ Entry to Streaming

Jon Favreau’s bounty-hunter series is off to a strong start. The streaming service? Not so much

Early in The Mandalorian, the Star Wars series’ title character — a laconic bounty hunter, hidden under armor similar to Boba Fett’s — is offered a state-of-the-art land speeder to drive him and his latest capture back to his ship. The Mandalorian has no interest in a droid-driven craft, and settles for an older, junkier model with a human pilot (played by comedian Brian Posehn). This rusty speeder literally has parts falling off as it pulls up, but it gets the Mandalorian where he needs to go, before ship and pilot are both consumed by a monster that lives under the planet’s icy surface.

The Mandalorian is the crown jewel of the originals available on premiere day of the new Disney+ streaming service. There are several unscripted series, a Lady and the Tramp remake, and, of course, a remarkable library of content built to appeal to children (and inner children) of all ages. But getting a live-action Star Wars series, created by Jon Favreau — and directed by Dave Filoni, whose impressive work in animation includes various Star Wars series and films, as well as Avatar: The Last Airbender — is, at first blush, as impressive as it gets in the Streaming Wars. (And that includes Apple bringing Jennifer Aniston back to TV.)

But as Disney+ rolled out with glitches that made the service either slow or completely non-functional for many users, it was hard not to empathize with the Mandalorian’s desire to go with the older model. Disney+ is the newest, shiniest service out there, and will likely become your child’s favorite within a few weeks — if not hours — but first it would be helpful to be able to watch the thing.

Anecdotally for me so far today, the app has been much more successful on iOs devices than on my Roku smart TV or any of my Kindle Fire Sticks. The Mandalorian, Avengers: Endgame, et. al. all play fine so far(*) on my phone or iPad, but if I want to see them on a big TV, I’m far more likely to get an error message than to get my favorite Marvel, Pixar, or Star Wars characters in a classic adventure.

(*) “Fine” is sometimes relative. Another of the service’s big selling points is the complete library of The Simpsons, but the early episodes are all in the wrong aspect ratio and lack commentary tracks. For all the flaws of the FX-run Simpsons World site (which shut down to make way for Disney+), it let you see the full picture of every episode, and also had all those commentaries handy. But both of those took a while on Simpsons World, too, so hopefully Disney+ gets the memo that the show isn’t mean to be seen in widescreen until somewhere in Season 20. There are also other quirks, like the famous Han/Greedo scene from the first Star Wars film featuring a different edit from all the previous versions that have been released, including Greedo saying something that sounds like “MacClunkey!” right before Han shoots him.

As any video game fan trying to play a hot new title (or anyone trying to get Beyoncé tickets as soon as they’re released) could have told you, launch-day glitches were inevitable. Not helping matters was Disney opting not to release the Disney+ app itself until now. (No one could have watched any content before today, but it would have been easier to log in, and the Disney IT department might have gotten a better read on their server load needs.) It’s a peril of any huge tech launch, but also one Disney could have foreseen to a better degree than it did.

Still, these problems tend to go away in short order. It’s possible that by the time the second Mandalorian episode debuts Friday(*), every Disney+ show and movie will play without incident on every device, and all those error screens will fade from memory, resurfacing only as a shared joke among the earliest adopters.

(*) Remember when every prestige cable channel decided that if they wanted to compete with HBO, they had to air their best shows on Sunday nights? That is apparently what most of the streamers have decided regarding Netflix and Fridays. It’s a day that makes more sense for companies that release whole seasons at once, since weekends can be a good time to binge. Disney+, though, is releasing episodes weekly (two this week only because of the Tuesday launch), which means they could have stuck with Tuesday or chosen some other day of the week where the streaming real estate is less spoken-for.

What I could get of the interface to work looked smooth and clean, and very (deliberately, I assume) reminiscent of Netflix. And the sheer tonnage of Disney, Pixar, Marvel, and Star Wars library content is staggering. So when it all plays correctly, that should be fun.

“Fun” is also probably the best word I can apply to the compact (under 40 minutes, which I thought was illegal for often-bloated streaming dramas) Mandalorian premiere. Favreau and Filoni do an effective job introducing us to this corner of the franchise, and to the rough, desperate circumstances of the title character, played by Pedro Pascal from Game of Thrones and Narcos. At this early stage, it’s Star Wars‘ Greatest Hits mashed up with the most popular clichés of film Westerns. We see familiar alien races and droid models, while the Mandalorian is a hard-bitten gunslinger with a secret soft spot, who at one point (with help from Kuiil, a survivalist voiced by Nick Nolte) has to break in the Star Wars equivalent of a bucking bronco (here called a blurrg). Even the twist at the very end — that the Mandalorian’s latest target is a baby from the same species as Yoda — echoes the plot of the Clone Wars film, where Jabba the Hutt’s baby son was kidnapped.

But then, both The Force Awakens and The Last Jedi were unapologetic remixes of elements from, respectively, A New Hope and The Empire Strikes Back. Only so many stories live in the naked galaxy far, far away, and what matters most is the execution. The action set pieces worked, especially the final one, where the Mandalorian teams up with IG-11 — a bounty droid (voiced by Taika Waititi) capable of spinning 360 degrees along its axis, and thus of taking on a wide range of opponents at once — to breach the stronghold where their quarry is hidden. And the world-building is impressive in how casually we see things like the Mandalorian’s carbonite-encased prisoners being floated out of his ship, or the Mandalorian tasering the monster from the ice.

Hiding Pascal’s face under the helmet the entire time seems a poor use of an expressive performer, especially since he’s playing a laconic character who rarely speaks and tends to keep his tone dryly neutral when he does. (The most emotion we hear from him is when he’s frustrated to be around IG-11.) But the premiere compensates as much as it can by surrounding him with more colorful and overtly emotional characters, including Werner Herzog as the Mandalorian’s enigmatic, unnamed client, Horatio Sanz as his chatterbox first capture of the series, and Carl Weathers as Greef Carga, who commissions our antihero’s adventures.

In all, it’s a promising start to the series, even if the service it’s on has had a rougher day of it. Years from now, when Disney has had chips inserted into all our brains, we can laugh about the Mickey and Pluto error messages, The Simpsons‘ aspect ratio, “MacClunkey!” and all the rest. Let’s just hope we also feel excited to recall the first time we saw The Mandalorian.

): Why Werner Herzog Really Signed Onto the Star Wars Series The Mandalorian
«The most interesting characters are the ones who lie to themselves.» - Paul Schrader, acerca de Travis Bickle.