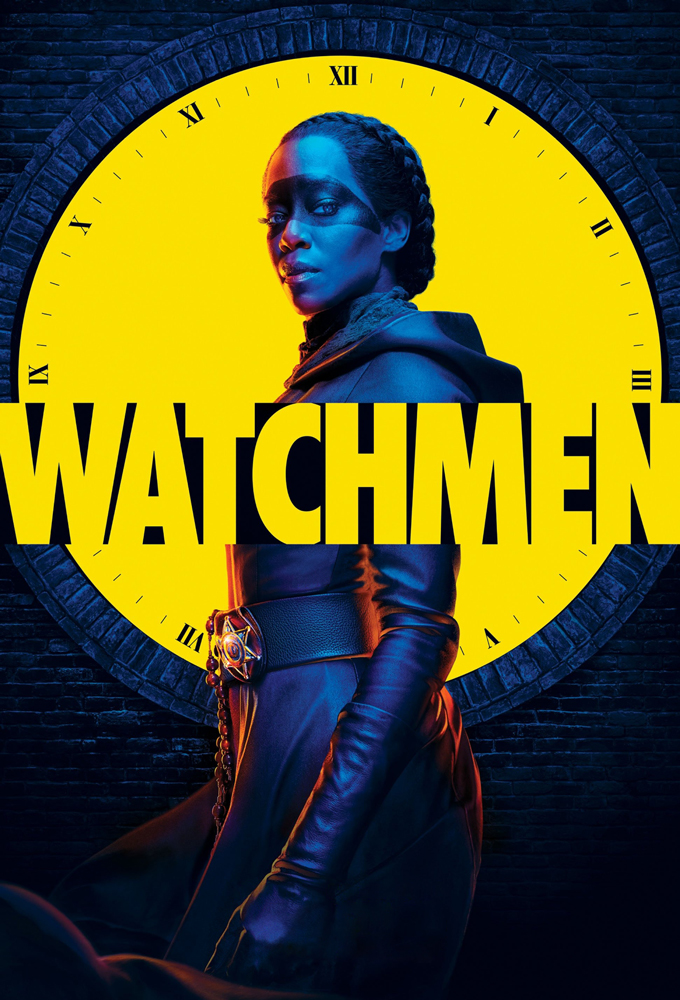 A modern-day reimagining where superheroes are treated as outlaws and must embrace the nostalgia.


A Dazzling Reinvention of a Landmark Comic

Damon Lindelof’s sequel to the Eighties work stays true to its spirit, asking big, difficult questions about today’s world — and the heroes and villains who live in it

Alan Moore and Dave Gibbons’ Watchmen landed on comic book fans in the fall of 1986 with the force of a thunderbolt, if not that of a giant psychic interdimensional squid. (You kind of had to be there.) The series was, among other things, a murder mystery, an alternate history commenting on that particular era of Cold War pre-apocalyptic paranoia, an extremely R-rated superhero story, and, oh yeah, a ruthless deconstruction of superhero comic books. Across 12 issues, Moore and Gibbons dismantled, harshly examined, then garishly reassembled every structural and thematic device the medium had been using all the way back to the birth of Batman and Superman. What kind of person, the book asked, would put on colorful tights and a mask to go beat people up in public? How different would our world be if people with godlike powers existed? Watchmen interrogated everything, down to the way individual panels were traditionally laid out. It was a comic book for adults, not just because of the sex, the language, and the excessively graphic violence, but because of its themes and the way it questioned the very nature and purpose of stories like it.

Watchmen, along with Frank Miller’s Batman story The Dark Knight Returns, utterly transformed the image and aspirations of the comics industry. They birthed the perpetual cycle of “Zap! Bam! POW! Comics Aren’t Just For Kids Anymore!” headlines, and inspired other creators to tackle more mature content. But most of Watchmen‘s creative descendants only skimmed along the surface of what made it so radical. They adopted the sex, the violence, and the sense of self-loathing about superheroes themselves, in a desperate cry to be taken seriously, but lacked Moore and Gibbons’ deeper ambitions. At the same time, Watchmen itself began to gather a reputation as unfilmable, with directors as varied as Terry Gilliam, Darren Aronofsky, and Paul Greengrass trying and failing to make a movie out of it. Eventually, Zack Snyder succeeded with his 2009 movie version. Snyder’s take has its moments (particularly an opening credits montage inserting superheroes into iconic American images across four decades), but in faithfully adapting the comic’s pulpy plot, it missed all the conceptual daring that was the important part. Characters who were meant to illustrate the absurd arrested development of superheroics were instead badasses having fights with bullet-time effects. It was like someone proving they could trace over a Picasso painting, without understanding what the original artist was doing with his strange rendering of the human anatomy.

Even the Snyder film’s most ardent supporters admitted the source material would have been better served as a premium cable series, which would have room for both the story and its many weird flourishes, and for the larger questions the comic raised. A decade after Snyder, Watchmen has finally landed at the screen home where it probably always belonged, HBO, but in an unexpected fashion. Damon Lindelof, the inspired, divisive mind behind Lost and The Leftovers — two shows with a generous helping of Watchmen DNA already — is in charge. Rather than simply retell the comic story at greater length, Lindelof has taken an enormous swing. He’s sidestepped adaptation altogether and created a sequel set in the same universe as the comic, that is faithful to the events of that story but only features a few characters from it. The setting — present-day Tulsa, Oklahoma — is completely different. So is the show’s central theme of white supremacy.

Where Snyder’s focus on following the letter of the law with Watchmen caused him to utterly miss the spirit of the thing, Lindelof’s disruptive approach comes far closer than you might expect at first, given how many departures he’s taken from where the comic book left off. Not all of it works, but it’s a fascinating — and frequently thrilling — attempt to rebottle some of the same lightning that Moore and Gibbons unleashed back in the Eighties.

Lindelof’s take isn’t a deconstruction of superhero shows, nor of TV dramas in general, in the way that the comic picked apart other comics. Television has been deconstructing itself plenty in the post-Sopranos era, and even some comic book dramas have done it, whether through the psychedelic imagery of Legion or the self-aware goofiness of Legends of Tomorrow. But he’s successfully taken the comic’s larger sociological questions and extrapolated them out to the terrifying world we live in now. In Ronald Reagan’s America, for instance, the thing that seemed on the verge of destroying us was nuclear war, and much of the comic’s story was fueled by fear of everyone dying under a mushroom cloud. In Donald Trump’s America, the existential threat is white nationalist extremism — and, beyond that, more casual but pervasive forms of racism — which Lindelof turns into the Seventh Kalvary, a KKK-style movement whose members wear masks inspired by Watchmen vigilante Rorschach. The Kalvary’s terrorist actions in turn have forced police officers to assume costumed identities, like Regina King’s Tulsa cop Angela Abar, who patrols the streets in a fetish nun outfit, calling herself Sister Night.

Cops dressing like superheroes is an inversion of a plot device from the comics, where masked vigilantes were legally banned in the Seventies. But it also feels unnervingly applicable to our world, where events like Botham Jean’s murder (and its violent aftermath) can create the impression — particularly in minority communities — that the police are already a team of untouchable vigilantes. That Angela herself is black is a complication the series examines early and often, with Lindelof again taking advantage of the fiery brilliance of King, who was briefly part of The Leftovers ensemble.

The story deftly toggles between our own history and the alternative one Moore and Gibbons crafted. We open decades before any event from the comic, with a horrifying depiction of the real-life 1921 massacre in the Greenwood section of Tulsa, which at the time was known, to the displeasure of local Klan members, as “Black Wall Street.” And then we land in a version of 2019 where Robert Redford has been president for a quarter century, and where Angela and her boss, Judd Crawford (Don Johnson) are at open war with the Seventh Kalvary. The series takes its time explaining how our past is connected to its present, particularly via an inscrutable man in a wheelchair played by Louis Gossett Jr. It’s also in no hurry to reveal how figures from the comic book — including Jean Smart as an older, hard-bitten version of Laurie Blake, who once fought crime as the scantily-clad Silk Spectre; and Jeremy Irons savoring every bit of scenery he can chew as an enigmatic exile who sure seems to be smartest man in the world Adrian “Ozymandias” Veidt — figure into this new story. There are parts that may be impenetrable to viewers who don’t know the original story (or even the movie’s slightly modified version of it), but the eventual explanations — and particularly the link from the Greenwood prologue to the present day — prove incredibly effective.

Along the way, Lindelof and his collaborators (including fellow Leftovers alum Nicole Kassell as lead director) continue to ask how the world would be different — both better and worse — if it had superheroes in it. The series as a whole isn’t a takedown of Peak TV, but there’s a great running gag involving show-within-the-show American Hero Story, a stylized anthology that’s Zack Snyder crossbred with Ryan Murphy. And through the use of this more cynical Laurie Blake — played with delightful and very necessary wry humor at all times by the great Jean Smart — the show nimbly continues the work of analyzing why someone would put on a mask to get what they want, whether they’re a would-be hero or a racist villain.

At times, Watchmen falls into some of the same traps that could make the first season of Leftovers so difficult to get through. The tone can be dour, the show’s visual palette frequently more muted than the material seems to demand. (The hypnotic synth score by Trent Reznor and Atticus Ross is more up to the challenge than many of the photography choices are.) But then we’ll cut to whatever ridiculousness Jeremy Irons is up to, or alien squid will rain out of the sky (again, you kind of have to be there), and Watchmen will come to dazzling life in the same jaw-dropping manner in which Lindelof’s two previous series so often did. The sixth episode, a largely black-and-white trip back to New York in the late Thirties, unlocks the show’s secrets and themes so smartly and audaciously, it left me feeling the same visceral, disbelieving thrill I haven’t experienced since Kevin Garvey sang karaoke to escape The Leftovers‘ afterlife, if not since we found out that Lost‘s John Locke was in a wheelchair before the plane crash. It’s the best kind of magic trick, where you can’t stop wondering how they pulled it off, even as you keep applauding the end result.

Alan Moore has famously disavowed any filmed adaptations of his work, and anyone else working with Watchmen in particular. It’s hard to imagine him even watching this show, let alone approving of all the deviations between his work and Lindelof’s. But I’d like to imagine an alternate version of history where Moore hasn’t been burned too often in the past by others playing with his toys. In that timeline, he sits down to watch what Lindelof has done with his signature work. He’s baffled at first by how little resemblance it bares to what he and Gibbons once did. But gradually, he lets the tiniest of smiles peek out from under his signature Old Testament beard as he sees how much this Watchmen can feel like his Watchmen, even if they look nothing alike.

Que coisa mais marada! Mas está a ser uma boa série. Melhor do que imaginei.
«The most interesting characters are the ones who lie to themselves.» - Paul Schrader, acerca de Travis Bickle.